Gender-Based Violence (GBV) Linked to Climate According to IUCN Report 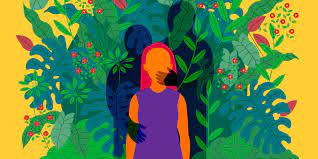 A critical 2020 report by the International Union for the Conservation of Nature (IUCN) landed on the climate desks of many leading reporting outlets, making headlines.

As reported in The Guardian and Mother Jones, among others, the global crisis of environmental degradation, the climate breakdown, and increased competition over increasingly scarce resources, are increasing violence against women and girls around the world, especially in vulnerable and poorer communities.

The IUCN report release was framed with a recognition that gender-based exploitation is in turn hampering our ability to tackle these intertwined crises, making wicked problems even more challenging, affecting the security and well-being of nations, communities, and individuals, and jeopardizing meeting sustainable development goals (SDGs).

The barriers to addressing environmental degradation and climate mitigation and resiliency are greater, in fact, if solutions do not consider gender inequality and the effects on women and girls at the onset. 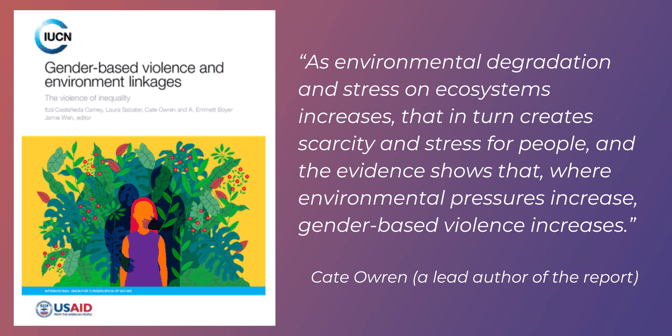 How is Gender-Based Violence Defined?

Gender-based violence includes domestic violence, sexual assault and rape, forced marriage and child marriage, forced prostitution, trafficking, as well as other forms of the exploitation of women. Organizations like Women to Women International broaden the definition in terms of other forms to include emotional, psychological abuse, threats, coercion, and economic or educational deprivation.

Typically, underlying causes of GBV are categorized by four overarching types of factors:

Regarding challenges of climate devastation and environmental degradation, factors are often intersecting, intertwined, and complex, and in accordingly, solutions are as well.

“Gender-based violence is one of the most pervasive but least talked-about barriers that face us in conservation and climate work,” Cate Owren a lead author of the IUCN report, in speaking to reporters when the findings were released. “We need to take the blinders off and pay this concerted attention.”

The IUCN carried out what is notably the biggest and most comprehensive study yet of the issue of gender-based violence (also recognized in acronym form as GBV). It took two years to complete and involved more than 1,000 sources of research.

The initial survey that grounded the study had a 60 percent response rate, with more than 300 replies from organizations around the world that provided capturing data and specific narratives linked to observed gender-based violence among female environmental migrants and refugees, as well as environmental rights defenders.

The incidences of violence were higher in areas where environmental degradation, resource scarcity, and environmental crimes were taking place. More than 80 case studies clearly showing such links were uncovered as part of the research.

For example, the report notes that during prolonged drought, child marriage is used by families as a strategy to cope with scarcity of food and income.

Findings also document more human trafficking in areas where the natural environment is under stress, and links between gender-based violence and environmental crimes such as wildlife poaching and illegal resource extraction. In Columbia and Peru, for example, illegal mining operations traffic girls as young as 12 years old.

As reported in prior Resonance Insights, climate-related disasters and intense weather events can increase GBV. For example, after two tropical cyclones in Vanuatu, there was an estimated 300% increase in new cases of domestic violence.

Even in their everyday tasks like drawing water and finding firewood under conditions of growing scarcity, women and girls are exposed to further dangers of violence.

As women and girls become more engaged in protecting ecosystems worldwide as we have seen of well-known movements in Africa, Asia, and Latin America, their involvement leaves them vulnerable to gender-based violence as tactics to intimidate and silence them.

Growing Research, Focus, and Initiatives to Address GBV Links to Environment and Climate

Although the IUCN report was not the first comprehensive study on gender-based violence (research has been ongoing in different capacities and through different organizations and teams), it has certainly in its scope and depth expanded it.

Several research articles have been published since the IUCN report emerged, including those focused on region-specific GBV, some highlighting natural resource specificity, such as water insecurity, the links between extreme weather events and GBV, environmental degradation links to increased violence against indigenous women, and the role of climate change in exacerbating sexual and GBV against women, among other forcus areas.

Several articles have also been published focused on recommendations through policy and legal frameworks, institutional reform, and partnership approaches to address challenges.

The IUCN report also provided a critical lens on this global challenge spurring more attention from global organizations, agencies, activists, and policy makers, and ushering in a greater sense of urgency.

UN Focus on Nexus Between GBV and Climate

The United Nations has long focused on the growing threat and impacts of GBV across the globe, examining the intersecting and underling cultural, institutional, and place-specific causes and nuances that make the issue, and redress, incredibly challenging.

In fact, the International Day for the Elimination of Violence Against Women was November 25 this year and marks the launch of the UNiTE campaign (Nov 25- Dec 10) — an initiative of 16 days of activism concluding on the day that commemorates the International Human Rights Day (10 December). 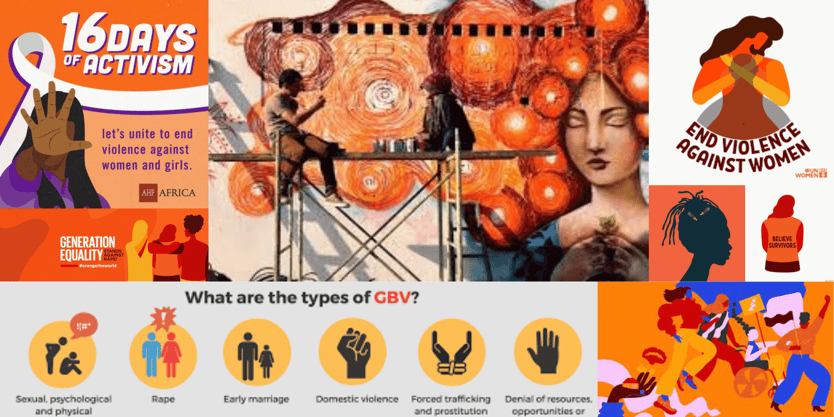 Organizational campaigns in support of the broader 2022 UNiTE campaign and 16 Days of Activism to raise awareness of the prevention and eradication of Gender-based Violence (GBV). Included are visuals from the AIDS Healthcare Foundation (AHF) Africa Bureau, UNWomen, the International Council of Jewish Women, New Delhi.  (SocialNews.XYZ - Source, IANS) and UNFPA Asia Pacific.

This campaign, led by the UN Secretary-General and UN Women since 2008, aims to prevent and eliminate violence against women and girls around the world, calling for global action to increase awareness, promote advocacy and create opportunities for discussion on challenges and solutions.

In the report, she assesses the intersecting vulnerabilities experienced by groups of women most at risk of the adverse impacts of climate change and introduces good practices and challenges in integrating a gender-responsive approach for addressing the climate crisis.

She describes at the onset the climate challenge as “the most consequential threat multiplier for women and girls, with far-reaching impacts on new and existing forms of gendered inequities.” She maintained that the “cumulative and gendered consequences” of climate change and environmental degradation “breach all aspects” of their rights.

Much of this growing UN attention on the obvious links between degradation and climate may be influenced by the concurrent work of researchers, including the seminal IUCN report, but also by activists, campaigners, and catalyst workers who criticized governments at the 2019 UN climate conference in Madrid for ignoring the plight of women and children and the threats they face.

Mounting pressures, particularly framed as hindering the advancement of mitigation, resiliency, and Sustainable Development Goals (SDGs) are moving the needle in some countries to put action for women and girls into their development and climate policies. The UN in Madrid motioned it would work to include a gender action plan as part of the climate negotiations.

In the opening to her editorial supporting participation at the UN COP27 held in Egypt last month, UN Women Executive Director SIMA Bahous said “the world is not on track to achieve Sustainable Development Goal 5 (Gender Equality)—in fact it is 300 years off.” Her language described an imperative:

Gender equality is the crucial missing link in the achievement of all our grand plans, including the 2030 Agenda and the Sustainable Development Goals, the Agreed Conclusions of the UN Commission on the Status of Women (CSW), the Paris Agreement and subsequent COP outcomes, as well as the collective commitments of Generation Equality.”

Although there continued to be attentiveness to the linkages between climate change and disparities of impact on women and girls at COP27, organizations like CARE expressed both optimistic wins (a fund for loss and damage) and disappointment there was little collective action taken on progress on the Gender Action Plan. That means governments have continued to leave women and girls, who are the most impacted by the effects of climate change, on the margins of climate action.

Despite the recognized need to address gender equality, which includes commitments and plans for eradicating GBV in all its forms, achievement may be incremental and require innovative approaches.

The IUCN Report, USAID, and the RISE Challenge

As part of this initiative, USAID’s Gender Equality and Women’s Empowerment (GenDev) Hub has been working with the Catalyst Project, implemented by Resonance, to design, launch, and manage the RISE Challenge.

With $2 million in funding, the RISE team selected nine winners to implement projects in Colombia, the Democratic Republic of Congo (DRC), Fiji, Guatemala, Kenya, Peru, Uganda, and Vietnam. The RISE Challenge is currently supporting nine organizations as they address several areas of concern, including:

As these activities continue, RISE has reported via published online stories and insights the progress of its grantees in meeting objectives and the catalytic changemakers who are advancing innovative solutions to GBV. Recipients have also been engaged in sharing out best practices, approaches, and lessons learned.

Two RISE challenge grant recipients, represented by Joyce Peshu of the Kenya Wildlife Conservancies Association (KWCA) and Trang Nguyen of WildAct Vietnam, were invited panelists to a side event at the UN Convention for Biological Diversity (CBD) Conference of Parties (COP15) in Montreal on December 10, 2023. The side event was timed on the last day of the UN 16 Days of Activism against Gender-based Violence, and showcased the unique and innovative work of both organizations in tackling the challenges of GBV at the nexus of environmental degradation, climate change, natural resource scarcity, and environmental crime.

Entitled “Together We Rise: Addressing Gender-Based Violence in Conservation,” the in-person gathering of delegates and webinar sought to draw attention to IUCN’s leadership on addressing gender-based violence and biodiversity linkages; a strategic action that supports the CBD’s post-2020 draft Gender Plan of Action – the first-ever to address GBV impacts in the environmental sector and advocate strategic action.

As an implementing firm, Resonance has a long-standing track record in global development and impact work that makes a very real diffence on the ground and in communities.

In addition to its work in Catalyst, which was implemented to design, launch, and manage the RISE Challenge, Resonance is also involved in a number of initiatives that are designed to empower women, promote equality, contribute to a just transition, and work to greatly diminish GBV.

Read more about our other related initiatives and activities: