By Courtney Johnson-Woods and Suzanne Smith

The result? Severe weather events with higher winds, heavier rain and stronger storm surges causing catastrophic flooding, shore erosion, and increases in death, as well as billions of dollars in damages to coastal and inland cities.

Traditionally, protection methods for coastal communities have relied on hard structures such as sea walls, levees, and jetties, if communities can afford them. But these can alter hydrodynamic and morphodynamic processes and have unintended consequences for the local ecosystems. They are also proving to be no match for the power of today’s weather systems.

Instead, today’s scientists are turning to nature to find solutions to protect vulnerable shoreline cities and communities. And one promising nature-based solution can be found in Mangroves -- those thickets of trees and flowering shrubs that grow in the brackish waters along tropical and subtropical coastlines.

Mangroves as a Nature-Based Solution

Mangrove forests are productive intertidal wetlands. They typically thrive in salty marine edge habitats that most other vegetation couldn’t tolerate. Mangrove forests can be found on the saltwater coasts of more than 100 tropical and subtropical countries, totaling more than 54,000 square miles or 140,000 square kilometers.

The intricate underwater root systems of mangrove trees create a flourishing habitat for a huge diversity of plants, fish, and other aquatic life. The roots also act as natural filter, trapping sediments and recycling nutrients, which affect water clarity and quality.

In fact, mangrove ecosystems might be the most efficient carbon capture and storage system on the planet. Most of the carbon dioxide is stored in the sediment along the ocean floor, although it is also stored in the trees’ roots and branches.

Although much smaller in size, mangroves and other coastal systems like sea salt marshes sequester carbon at a much faster rate than the Earth’s forests.

Today, mangrove forests are recognized worldwide as one of nature’s best defenses against the impacts of climate change along coastlines.

The trouble is mangrove forests have been in serious decline worldwide due to deforestation from rapid urbanization, forestry, exploitation of natural resources, farming, and, most recently, the expansion of aquaculture, particularly in Southeast Asia.

According to UNESCO, mangroves have been disappearing “three to five times faster than overall global forest losses.” It’s been estimated that at the end of the 20th century, 50% of the world’s mangrove forests had disappeared.

But there is some good news: a serious global effort to protect and support the cultivation of mangrove forests is underway. Collaborations among scientific experts, government agencies, NGOs, local communities, and finance and policy experts are starting to slow down the speed of mangrove habitat loss.

One organization that is making a difference is Global Mangrove Alliance (GMA). Founded in 2018, GMA represents the combined efforts of 30 organizations working to increase the global area of mangrove habitat through conservation, restoration, and equitable management.

Earlier this year, GMA released its annual The State of the World’s Mangroves 2022, which provides an up-to-date and comprehensive look at the state of the world’s mangrove habitat loss and global restoration efforts. 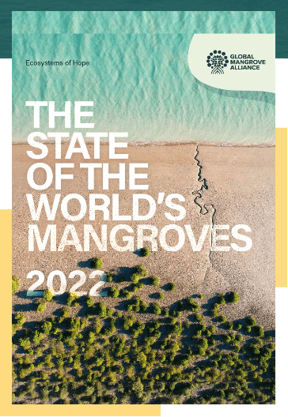 According to Mark Spalding, Senior Marine Scientist for The Nature Conservancy, the 2022 report makes it clear that while “the tide has yet to turn on [mangrove forest] loss,” the worldwide effort is working.

“[The report] describes a surge in our understanding of mangroves globally and multiple points of hope: mangrove loss is declining, we know more about protecting these ecosystems than ever before, and partnerships and global awareness are ever stronger.”

In September, the GMA and the UN High Level Climate Champions announced the Mangrove Breakthrough, a joint initiative designed to secure public, philanthropic, and private long-term financing for the protection and restoration of mangroves ecosystems as part of the Race to Resilience, which was launched by the UN Climate Action High-level Champions in January 2021 at the Climate Adaptation Summit.

In an article published in Global Change Biology the researchers noted that “62% of global [mangrove] losses between 2000 and 2016 resulted from land-use change, primarily through conversion to aquaculture and agriculture.” The researchers also estimated that “up to 80% of these human-driven losses” occurred within six Southeast Asian nations.

The explosion of aquaculture is, in large part, driven by the collapse of fish populations worldwide due to overfishing and unsustainable practices and an increasing world demand for seafood.

If the GMA’s goal of cultivating half of the estimated 8,183 km² of restorable area by 2030 is met, it would result in an additional 25 billion commercial marine fish and shellfish. That would be a significant benefit to small-scale fisheries and marginalized coastal communities that rely on mangroves for food and their livelihoods.

The benefits of mangrove ecosystem restoration are clear. How fast the world can move to reverse habitat loss and cultivate forests remains to be seen.

According to the GMA, preventing just “1% of mangrove loss, would result in 200 million tons of sequestered carbon.” Preventing a 1% loss would also be a decisive step in protecting coastal communities, shorelines and wildlife from the irreversible effects of climate change.

Expanding Mangrove Replanting in the Philippines

This summer we announced in our published Insights the GForest Mangrove Rehabilitation Project, an exciting new partnership and activity that emerged from the USAID Fish Right Initiative. As part of this effort, the mobile wallet app company GCash expanded GForest environmental sustainability feature, giving its more than 5 million users the ability to virtually plant mangroves in the Philippines.

With the GForest app, GCash customers can with ease direct accumulated ‘green energy points’ amassed by their own efforts to reduce their carbon footprint via online cashless transactions and services, to planting mangroves.

The aim of the initiative is to plant 125,000 mangrove trees in Culion, Palawan as part of the company’s ambitious goals to integrate sustainability into its core business.

The GForest Mangrove Rehabilitation Project represents an allied effort with the Culion Foundation and the USAID Fish Right Program, an existing partnership between the Government of the Philippines and the U.S. Agency for International Development (USAID), as well as the University of Rhode Island (URI) Coastal Resources Center, Resonance, and other local foundations and NGOs engaged in sustainable fisheries.

An additional and important activity of the Fish Right initiative over the last several years was coastal mapping along the coastlines of the Philippines, which of course includes mangrove forests. Much of this critical work has been published in a StoryMap that communicates this work to the broader public.

As is the case in many areas across the globe, the Philippines has lost a significant proportion of its mangroves, more than 50%, in recent years, due to several threats including land use conversion (aquaculture) and development, pollution, deforestation for fuel, and climate change.

Research in this area following the super-typhoon Haiyan (locally known as Yolanda) affirms our understanding of the vital role mangroves play as nature’s bioshields for vulnerable coastal communities.

We anticipate that our ongoing work in sustainable fisheries, which includes a five-year project in Indonesia (USAID Ber-IKAN), will likely include attentiveness to mangroves. We will report on these and the efforts of the GForest Mangrove Rehabilitation Project in the Philippines and the ways restoration as a nature-based solution can address climate resiliency in vulnerable coastal communities.