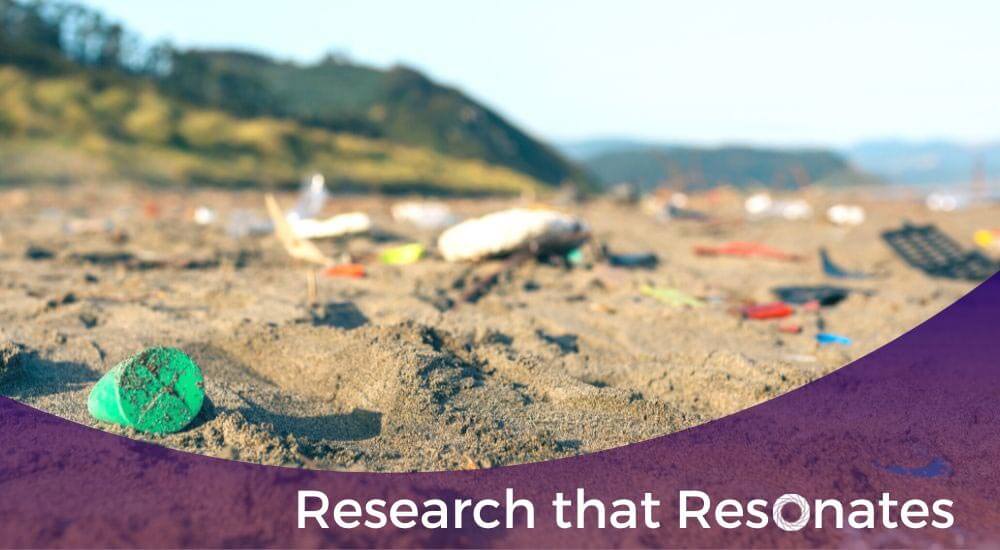 August is National Water Quality Month in the United States. It is also the month in which one of the largest annual global conferences on water convenes in Stockholm, Sweden titled World Water Week slated for August 23-September 1 this year.

Fittingly, the theme of World Water Week, ‘Seeing the unseen: The value of water,’ frames the growing concern over microplastics, pollutant-packed particles typically between 1 μM to 5 mm long, that are threatening marine environments and raising concerns more broadly about human health.

Here we profile 5 widely-cited scholarly articles in the last year under the umbrella topic of Microplastics in Marine Environments. This is part of our “Research that Resonates” series, which features research in multiple fields and on global topics of interest reported in research and academic publications that typically sit behind a paywall.

This review might be useful to proposal writers and project teams embarking on initiatives related to microplastics from plastics in the ocean, an important environmental challenge and emerging ares of research, including formulation of policy as well as pursuit of innovations and solutions.

The 5 Research Publications on Microplastics in Marine Environments

1. The Impact of Microplastics on Marine Environments: A Review.

This article gives a thorough overview of microplastics, their fate in aquatic environments and pathways to enter the human body including the food chain, and toxic effects to the environment and marine health. What stands out in this published review is the inclusion of important statistics accompanied by citations, and the clarity in which physical fragmentation, biological degradation, and chemical degradation processes that break down plastics into micro particles are described, enabling those writing about the challenge of microplastics to utilize the article for basic reporting.

In addition, the authors identify mismanagement of plastic waste disposal as the most significant cause of microplastic pollution and provide the latest update on the fate and toxicity of microplastics on aquatic life. It concludes by highlighting potentially safe methods for remediation of microplastics and recommendations for future research.

This article reports on the effects of microplastics on the red coral, a long-lived habitat-forming organism belonging to the Corallium genus, which is present at almost all latitudes from shallow-water to deep-sea habitats.

The potential for this research is significant given that Octocorals are considered among the most important ecosystem engineers in both deep sea and temperate areas, and are distributed across the globe, contributing to ecosystem functions and high levels of biodiversity across marine systems.

According to the team, when exposed to microplastics, “corals preferentially ingest polypropylene, with multiple biological effects, from feeding impairment to mucus production and altered gene expression.” They further suggest that microplastics at the concentrations present in some marine areas may be significantly greater than predicted in offshore and coastal environments, which is concerning given their findings.

Their results indicate microplastic particles have multiple effects including coral death due to the creation of abrasions that allow the proliferation of opportunistic bacteria. They state, “the extent of this impact increased progressively with increasing particle concentration, determining mortality at the highest contamination levels.”

Given the predictions of greater concentrations of microplastics for most oceans in the coming decades, replicating studies such as this may be an imperative. The authors also conclude that these same process impacts may apply to other habitat-forming suspension-feeding species.

3. Ecotoxicity of Microplastic Pollutants to Marine Organisms: a Systematic Review.

Using a systemic quantitative literature review (SQLR) method, this article reports on the most common polymers, hazardous chemicals, and marine organisms to ingest microplastics and incur ecotoxicological consequences at the cellular, biochemical, and muscular levels.

The authors also describe a three-stage behavioral process in which contaminants are first transported to a new environment. The second stage of behavior is organismal, that is when a contaminant adsorbed by plastic is ingested. In the third and final stage, the plastic, if small enough, can travel into cells, resulting in bioavailability (the ability of a compound to either adsorb onto or cross an organism’s biological membrane) and bioaccumulation.

Also reported were the biological impacts and side effects of microplastics on marine organisms included mortality, reproductive effects, genotoxicity, accumulation, and behavioral effects. Additional discussion included implications for the food chain, and management of pollutants and plastics. Limitations and recommendations for ongoing examination of research were also addressed.

As researchers and environmentalists sound the alarm regarding the likely reality that our existing and future microplastics will remain through transport and transformation in our ecological and biological systems indefinitely, there are calls for research to examine possible mitigation strategies. This article reports on the potential for seagrass meadows to trap and filter microplastics from marine environments.

They rely on research that suggests marine and coastal vegetated ecosystems that form underwater or temporarily flooded canopies, such as seagrass meadows, saltmarshes, macroalgae beds, and mangrove forests, are not only key habitats for juvenile fish and invertebrates as well as marine megafauna but are also well-known particle trappers within their canopies. Given this role, the authors posit these ecosystems might also retain microplastics, especially those with negative buoyancy, becoming accumulation areas (sinks) for microplastics.

Although there are some field studies with limitations, this is still considered a novel research field, and this study examined for the first time the occurrence of microplastic retention by marine canopies in a hydraulic flume under unidirectional flow velocities.

Overall, the team’s simulations revealed that microplastics particles transported with the flow were retained in the seagrass canopies but not in bare sand. In addition, less dense sinking particles (PS) might escape from the canopy at high velocities, while denser sinking particles can be trapped in scouring areas created by erosive processes around the eelgrass shoots, with degree of sink capacity dependent on certain bio-physical conditions.

The researchers conclude that seagrass meadows, and other aquatic canopy-forming ecosystems, should be prioritized habitats in assessment of microplastic exposure and impact on coastal areas since they may accumulate high concentration of microplastic particles that could affect associated fauna.

5. Microplastics in Marine Environment: A Review on Sources, Classification, and Potential Remediation by Membrane Technology.

This is one of the most oft-cited articles under the umbrella of Microplastics published in 2021, focusing on a review of the classification of microplastics and associated remediation technologies that can be applied depending on particle size. In addition, the authors present membrane technologies (microfiltration, ultrafiltration, and nanofiltration) in the context of “microplastics removal suitability.” They conclude with recommendations on a future path of research and development for mitigation.

The authors really provide a comprehensive review and is packed in terms of explanations, statistics, illustrations, and critical references to research. This is a foundational review that could serve as a basis upon which the “challenge” of microplastic pollution is defined in project proposals and research studies.

To that end, the researchers conclude by highlighting potential areas of pursuit:

Why this Microplastics Research Resonates

Resonance has been engaged in several partnership impact projects related to water and natural resource (NR) sustainability through collaborative partnerships, particularly those supported by USAID.

This includes our USAID Fish Right partnership in the Philippines, and the USAID/Ghana Sustainable Fisheries Management Project (SFMP), among others, focused on implementing collaborative solutions for sustainable fisheries. Our portfolio of work also includes partnership projects critical to ensuring the global population has access to clean water, sanitation, and hygiene (WASH), a significant concern in the international development community.

Microplastic pollution poses long-term challenges and should be monitored and considered as part of landscape analysis and opportunity mapping for organizations engaged in global development initiatives, as well as private companies for which water quality, ecosystem health, and marine resources across supply and values chains are inherent to sustainability goals and sustainable impact.

Day 1 at Davos 2023: Talk of a Looming Global Polycrisis

How to Build a Sustainable Agriculture System in Emerging Markets